Confabulating with Cows and Herding Cats 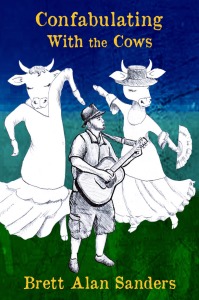 Aside from my collection of essays, announced in the previous post, hot off the press at Per Bastet Publications is issue 21 (Herding Cats and Other Alien Creatures) of the Southern Indiana Writers’ Group’s Indian Creek Anthology Series. I happen to have short fiction in issues 20 and 21, the most recent of which I also edited.

My story for the present issue is briefly described in the volume’s foreword, which I excerpt below. My contributions to the previous issue (XX: SIW Goes Platinum) include a series of comedic short-shorts under the general title “Madcap Midwestern Mythologies” and scattered throughout the volume; and “Brotherhood of Man and Beast,” a comedy about the encounter and unlikely friendship between a conservative Christian preacher and a teacher of the literary-rhetorical arts of Charles Darwin. I have written about them previously.

Following, by way of introduction to the new volume, is the text of my foreword: 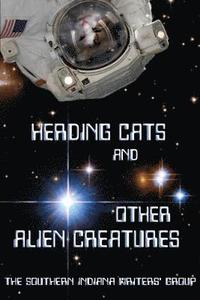 As I was reading the recent English translation of Alice Herdan-Zuckmayer’s The Farm in the Green Mountains, the chapter called “Confusion in the Chicken Yard,” I reflected on the theme of this twenty-first volume of the Indian Creek Anthology Series. Herdan-Zuckmayer’s book is a memoir about the author and her husband Carl’s experience, as political refugees from Nazi Germany during the first half of the Forties, running a farm in backwoods Vermont. Neither she nor Zuck, as Alice called him, were experienced farmers. So the account of their time in that American wilderness – with its echoes of some of the more remote rural communities in southern Indiana – was full of humorous adventures as they labored to herd those chickens and other farm animals into some semblance of order.

The “herdee” in question, in this passage, was Hermann, an ungovernable goose who was enamored of a duck and violently resisted their being housed every night in separate sections of the poultry shed. “Without the broom,” Herdan-Zuckmayer writes, “we could not have controlled Hermann, who was wild and dangerous. In fact, the broom often played an important role in driving the animals home, in separating fighters, and in self-defense.”

All the farm animals, except for the goats who liked “to nibble at the broom straw,” were afraid of it. All they had to do was “hold the broom in front of [them], like a witch who is ready to mount her broomstick to ride to the Blocksberg, and the animals scattered and took flight in the desired direction.

“Even the hair on the cats began to stand on end, and they arched their backs and started to spit when the stubby face of the broom approached them. It seemed almost like a magical fear of the witchly attributes that made the animals run away.”

A sort of writerly magic exists in the collaborative effort that has brought together the nine stories, two poems, and single work of creative nonfiction in this latest production of the Southern Indiana Writers’ Group. In “Herding Cats,” the poem that opens the volume, Jen Selinsky speaks of the magician’s act involved in bringing together such a “wild assortment” of writers and authorial visions, both in person and in these pages. She is followed in almost seamless transition by Marian Allen’s fast-paced, antic, police comedic-drama “By the Book,” which places the literary arts where they belong at the center of sentient life: the action unfolds on the planet Llannonn, in and around a “Living Library” (“a group home for people who chose to make careers out of memorizing stories and novels and reciting themselves to anyone of good character who presented a library card”) where quick-drawing and impassioned Assistant Librarian Holly Jahangiri leads the charge against a band of ruffians who have been waylaying some of the Living Books.

From across the pond in Great Britain, our own “alien” writer, Andrea Gilbey, contributes “A Furry at the Bottom of My Garden, or, The Cat Who Fell to Earth.” What, on the surface, is a charming comedy of errors, in Andrea’s deft hands becomes also a comprehending glimpse into the lonely experience of “otherness.” She does this with a lightness of touch capable of planting, in the garden at the bottom of her readers’ hearts, a resurgence of compassion in this world of competing nationalisms that are so quick to place human beings in boxes or shipping containers stamped with such dehumanizing labels as “illegal” or “alien” or “refugee.”

The two pieces that follow, J. Baumgartle’s fictional “Cat Power” and Janet Wolanin Alexander’s memoiristic “Humans: Herders or Herdees?” share the anthropomorphic conceit of being narrated by the little furries at stories’ center: in Baumgartle’s story, which shares some of the social consciousness hidden at the heart of Andrea’s tale, the narrating cat is instrumental in preventing a minor environmental atrocity; in Alexander’s, the series of cats who have insinuated themselves into the lives of “the Js” (Jim and Jan) make the case for a re-ordering of that power structure.

“Leader of the Pack” is Brenda Drexler’s whimsical recasting of the Shangri-Las’ 1965 hit, its feline dialogue connecting it happily with Disney’s anti-tragedy The Aristocats. Ginny Fleming’s hilarious “Cat-O-Strophic Spelling,” for its part, makes lemonade out of an almost-tragic metamorphosis that, through some seriously bad “spelling” (of the magical, not orthographic sort), takes an apparently mismatched pair of human lovers in a direction in part feline, but ultimately and rather sweetly canine.

The “wistful lion” that, in Baumgartle’s elegant poem, “hauls itself slowly upright from the pride-scented grass” to survey its landscape, would seem to beckon toward the guardian goyle and its kitten-goyles in the richly imagined fantasy world of Bonnie Abraham’s “Out of the Cabinet.” Mistress Playit Wrenmother and her “small covey of future mages” paint a subtly humorous picture as they traipse through the school of wizardry and surrounding city, engaged in some of their own at-once less catastrophic and more cosmically significant spelling than the lemons-to-lemonade spelling of Fleming’s story.

That fantasy, with its almost Biblical overtones, leads to the Lakota Sioux spirituality underlying the science fiction of T. Lee Harris’s “Ghost in the Machine,” in which Captain Miranda Morningstar, a United Americas Marine Corps Ghost Walker, is called on to investigate an explosion that shook the asteroid where they are based; only, in a process that her shaman called “the snapping of the tether between body and spirit,” her spirit leaves the body behind in anticipation of her mission. T. Lee’s story is full of darkness, light, and the vicarious thrill of mortal combat with some truly alien creatures.

Returning, at last, in “Covenant Restored,” to the familiar mortality of this present Earth, Glenda Mills explores the making and sundering of human relationships from a Catholic perspective; her narrative is one woman’s inner struggle that lands, with hope but no more assurance than any of life’s ventures, in a new romantic attachment whose initial promise is to be sealed with the purchase of a cat. And finally, I offer my own somewhat dark-edged (but ultimately exultant) romantic comedy, “Courting Mel,” whose struggling middle-aged lovers – heads of a colorfully eccentric Mormon family – find their way, before a backdrop of looming war in Iraq and a rebellious teenage daughter’s dalliance with a biker several years her senior, through their own crisis of faith and love.

I am much indebted, in this my first year editing SIW’s Indian Creek anthology, to Marian Allen and T. Lee Harris with their twenty years of previous experience; but also to the club’s other members, old and new, in particular those who have lent me their excellent writing. It is without the slightest hesitation that I recommend our combined labor to a reading public that completes our sister- and brotherhood of lovers of the incomparable magic of good stories. We hope that you will be at once entertained and edified by our work.