An extraordinary new review and contextualization of Passionate Nomads 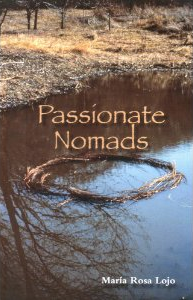 This has been an uncommonly good week for my translation of María Rosa Lojo’s La pasión de los nómades (Passionate Nomads, Aliform Publications, 2011). First Janek Pytalski’s generous and passionate review for Three Percent, the Open Letters Books blog for translation reviews (1/23/14 posting); and now Lucina Schell’s remarkably thorough, nuanced, and well-researched review at her Reading in Translation blog. Click on the following link to read what she wrote:   http://readingintranslation.com/2014/01/27/passionate-nomads-by-maria-rosa-lojo-translated-by-brett-alan-sanders/

One delight in reading Lucina’s review is her contextualization of the novel in relation to Eva Gillies’s translation of Lucio V. Mansilla’s Una excursión a los indios ranqueles (A Visit to the Ranquel Indians, University of Nebraska Press, 1997). Her close reading of María Rosa’s text in my translation and of Mansilla’s in Eva’s translation allow her to point out how pertinent both of those Argentine books are to our own sad history of conquest and genocide in these United States of America. That is a point that perhaps I have not made well enough myself, and I am indebted to Lucina for making it so well for me.

It was Eva Gillies, incidentally (I wrote to her after encountering her remarkable translation of Mansilla’s work, which I had been working at translating myself), who put me in touch with María Rosa, telling me that she had a book in need of a translator. This was around the year 2000; some other time, perhaps, I will share my essay “In Search of Dorotea Bazán” (published previously online in New Works Review and later in River Walk Journal, at its editor’s invitation) which relates this story in more detail. But the short of it is that I did translate María Rosa’s Mansillan novel, among other of her work, and that both she and Eva helped me critique and refine my own Mansillan novella called, in the version that was eventually published, A Bride Called Freedom (Ediciones Nuevo Espacio, 2003; in a bilingual edition with Sebastián Bekes’s Spanish-language translation).

Eva, who died two years ago this month, became a close friend and mentor and I owe to her much of my early progress as a literary translator. It must have been around August of 2002 or 2003 that she visited me and Anita in Tell City, Indiana. The new school year had just started and she was my guest in my high-school English and Spanish classes, where she spoke about her experience in Asia and Africa as both an anthropologist and an interpreter. And about her Buenos Aires childhood: she was the daughter of a German man and a Jewish-Argentine mother; born in Germany in 1930 and left there with her parents when her father determined that Hitler was not going to go away any time soon; then, during the Perón years in Argentina, went to study in England where she ended up spending much of her adult life. 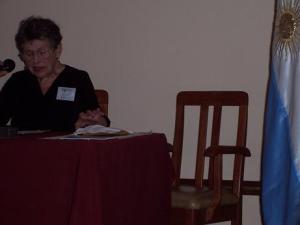 On Saturday after her classroom visit, my wife Anita and I traveled with her to neighboring New Harmony, Indiana where in the 19th century two different utopian communities flourished, one religious and the other not so much. Later, at the end of June and beginning of July 2005, we met up again with María Rosa in the city and province of Córdoba, Argentina. There the two of them were keynote speakers at a historical conference on Lucio Mansilla and his sister Eduarda, and I was invited to read a passage from Sebastián’s translation of my novella. Before that weekend I was fortunate to spend time with Sebastián and his family in Concordia, Entre Ríos and also with María Rosa and her charming family in the suburban Buenos Aires neighborhood of Castelar. (It was also in Córdoba that I met María Gabriela Mizraje, who gave a brilliant presentation on Mansilla and whose fiction I recently published in The Antigonish Review.)

Just recently I received word that Eva’s book The Memoirs of Eva Gillies: An Interpreter at Large, is now on sale at amazon.com. I was privileged, before her death, to read and help proofread her draft manuscript. I have ordered my copy of the finished product, which after I read it again will go on my shelf beside her husband Mick Gillies’s memoir (Mayfly on the Stream of Time); he had recently died when I initially wrote to Eva to compliment her Mansilla translation, to share a copy of my little chapbook Quixotics, and to ask her to read

my own Mansillan manuscript. One of the most important letters I ever wrote. (Mick Gillies, by the way, was an entomologist who spent a fair amount of his time in Africa working on the problem of mosquitoes and malaria. His charming memoir includes an account of his trip with Eva to Argentina in the 1990s. The picture at right is a later edition of his book – with a new subtitle – from the edition that presently rests on my shelf.)

To return to the subject of Lucina’s review of Passionate Nomads (and, tangentiallly, of Eva’s translation of Mansilla, who plays the male lead in María Rosa’s novel), I couldn’t have asked for a better or more thorough critique. I hope that you, my readers, will enjoy reading it and that it will move you, if you haven’t already, to purchase a copy of the book and read it too. It is a book that, as Janek and Lucina help make the case in their different ways, richly deserves a much wider readership in the English language. Thank you for any efforts you might make to further spread the word.